Whoooo Hooooo, all my Christmases coming in one day. BlackBerry to PNG and just moments ago the friendly Telikom service man walked into my office and installed my ADSL connection.

My speeds have now increased from previously 42 kps to now 100 MB/sec.

Finally all the music I can listen to, all the downloads, all the software, the whole world is now at my finger tips. So what better way to test it out then watching ‘Rick Astley’s’ Never Gonna Give You Up on YouTube.

Robert has pointed out below in the comments that I may not actually be getting 100MB as shown on my PC status. So as suggested by Alex, I ran a speed test on Speedtest.net. Below are the results, which makes an important point by Robert that you should always question everything. 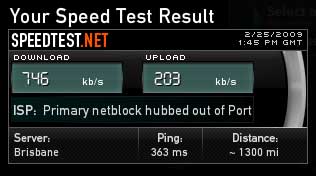 The above test was done around 1am this morning. The test below was done today at about 9.15am. Not a huge difference. I’ll try again later at 12pm which I’ve found to be a busy period in Port Moresby.

Another thing to note, I’m also running a wireless hub on my ADSL which is being used by a laptop as well. Just pointing that out as Alex said that this could also effect the speed tests. 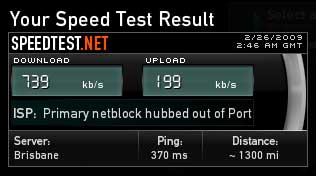 28 thoughts on “Got My Telikom PNG ADSL!”