As mentioned in a past post, I have been collecting several books on Arts & Culture in PNG from the 1970’s. What fascinates me the most is how active the arts scene seemed to be in those days. This post will be one of a series which I want to share with you all,  just to show what was going on back then. It’s also interesting to note all the plans for the future that they had back then, but I’ll get to that later. 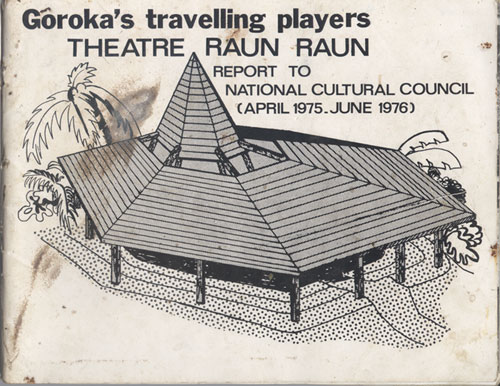 This 1976 publication was the first ever report from the Raun Raun theatre. Although it has several sections in it, today I wanted to start by just copying the introduction in the report. Here goes:

“In early April, 1975, the Raun Raun Traveling Theatre was formed in Goroka with a grant from the National Cultural Council. A theatre truck was purchased with some help from the Goroka Rotary Club and housing was granted by District Authorities to accommodate drama students on the one hand and director/office on the other. The Theatre’s original function was to travel with ‘maket raun‘, a suggested scheme for taking public services, private sector activities and entertainment to a circuit of large village centres around the area.

In the Maket Raun Pilot Project – Feasibility Study, Professor Ulli Beier from the Institute of Papua New Guinea Studies commented: “the maket raun sites will provide an ideal way to start a theatre because the maket raun creates a larger potential audience.” (G.R. Ward et al., A.N.U., 1974, pp.25). The Eastern Highlands has two significant advantages for traveling theatre groups of this kind. One is the large network of roads radiating into the other Provinces. The other is that the Kainatu area has seen, over the last few years, a mushrooming of local “theatres”. These are centres for village entertainment called “haus singsing:. They are large, round buildings of bush materials with a roofed area all around where the audience sit and an open space in the centre for performances. The maket raun having not been implemented in the Eastern Highlands, Theatre Raun Raun began a tour covering three provinces, eastern Highlands, Western Highlands (where the maket raun us going ahead) and Chimbu, between June 20th and July 14th.

The group performed quite profitably in 6 villages, 2 “haus singsings”, 4 towns, 1 market, 1 University and 5 High Schools. What Joel Adedeji says of Nigerian folk theatre has affinities with the Raun Raun group: “As professional, itinerant or traveling theatres the troupes perform in school halls, town halls and improvised stages out of doors in many parts of the country.” (Oral Tradition and the Contemporary Theatre in Nigeria in JAL 11, 2, pp.134). The group has continued tours of this kind and has now established itself in the Highlands, it draws support and a great deal of interest from other provinces as well. It visits maket raun circuits in the Western Highlands quite frequently.

The name, Raun Raun, encapsulates the three [two] ideas of the maket raun, theatre in the round and traveling. The aims of the group are:

a. To become a full-time drama school where interested Papua New Guineans may study and perform in a theatre adapted to the special needs of the country. The group will therefore become a traveling theatre in the commercial sense as well as a school of actors in the professional sense. And eventually a theatre if national importance.

b. To take entertainment to village people in the highlands of Papua New Guinea and an area totaling six Provinces of the country.

c. To encourage the development of a network of such groups on a smaller scale of course and to the extent that the Papua New Guinea population and environment can support traveling theatre.

d. To attempt through performances to stimulate an interest in Papua New Guinean traditions of song, dance and drama and to stimulate the development of new forms of drama in response to the modern situation.

The group is then directly responsible to the National Cultural Council in Port Moresby as far as financial and policy matters go. Local administration is carried out with the help of the Area Authority and District Office. This group has established healthy working relationships in artistic matters with the Goroka Technical College and Goroka Teachers College, [and they] exchange personnel with [the] Technical College on occasions and attending [personnel from the] Teachers College for assisting with integrated expressive arts projects.

The composition of the group which has fluctuated a little at times is:

(all the above have been with the group since 1975)

There are 2 Form 4 graduates in the group, 2 Form 2 leavers and 8 standard 6 leavers.

Members of the Raun Raun Theatre receive accommodation if they need it and an allowance of K30 per fortnight. When they are not performing, they spend each day as follows:

It is quite a demanding schedule and the fact that the students go at it with enthusiasm is a tribute to their developing sense of commitment and professionalism.

The group are involved in all matters of organisation and administration; this is necessary since the group will be largely running itself by mid-1978.

Raun Raun Theatre is an innovative experiment in Papua New Guinea drama and as such has been so far an outstanding success. There is perhaps no better tribute that the one offered by the National Cultural Council: “May I on behalf of the Director of Cultural Affairs take this opportunity to congratulate you in your first year of operation and we look forward to seeing the Theatre Raun Raun continue to develop into a national theatre”