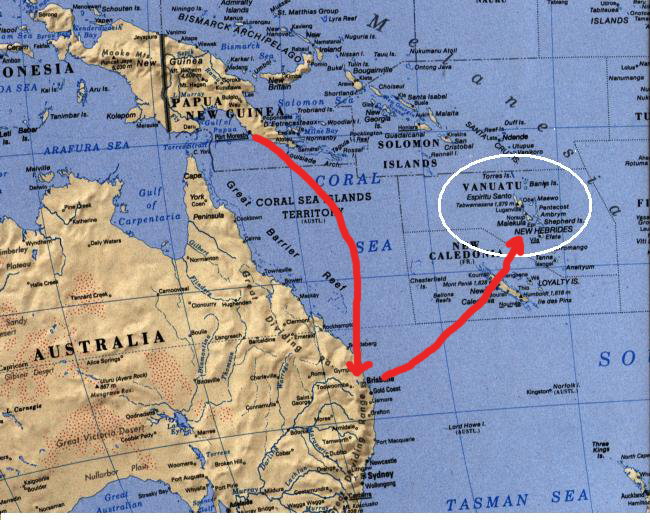 So am off to Port Vila on Monday via Brisbane. Going out to visit USP’s Law School for a consultancy job on their Pacific Islands Legal Information Institute (PacLii) website.

It’s been several months now since I have been to another Pacific island country, I was in the Solomon Islands over Christmas and then through Tonga, Samoa and New Caledonia during March last year. So I’m slowly beginning to familiarize myself with our cousins in the region.

The Melanesian countries obviously interest me the most and they are the best gauge to compare what PNG is doing right or wrong or could be doing better. So will be interesting to see what Port Vila and its people are like.

I only wish that I was traveling at the time of Fest’Napuan as I’ve heard so much about the regional music festival. But it seems there are a whole lot of other things to do as well. Just from comments on my status update on facebook I’ve been told that I should try the following, (if I have time away from work that is):

But the best one was from Cameron Kennedy in Cairns who suggested that I have a drink at the Voodoo Bar. Minutes after he posted this tagged comment on my FB wall I got this message from Mr. Voodoo himself:

“…Hi Emmanuel
Your post popped up on our page as it was tagged when our name was mentioned. Feel free to come in and I’ll buy you a “Flaming Voodoo Doll” which is the drink we’re famous for, and I’ll fill you in on where to go, how to get there and what to do in Vanuatu. Not open till Wed night though but would definitely recommend Cascades waterfalls as somewhere to go when you get in for starters. It’s beautiful. Take your bathers and a camera.
All the best and hope you enjoy your trip.
Cheers
Mack (aka Mr. Voodoo)…”

Now that’s what I call marketing at it’s best and even before I’ve even left PNG. Maybe something our hotels here could learn from instead of being so stingy with their K1,000 plus room prices, anyway that’s another story.

Well I’m off, gotta pack and iron some shirts. Will most likely email an update from the State Library in Brisbane before I post something up from Vila itself. Lukim 🙂

6 thoughts on “I’m Off To Port Vila, Vanuatu”