Newly independent nations often encounter a curious tension between ‘tradition’ and ‘modernity’ which results in an ideological dilemma that carries the dual charge of essentialism and epochalism. Essentialism suppresses temporality by exhibiting the assumption that the world of reality is situated in an unchanging primordial ontology which however neglects the specific and historically contingent products of human or other forms of agency. Epochalism on the other hand tends to see historical and economic change as a series of successive moments that spiral out of epochal turns with discrete intervals of time in between epochs. One era or epoch belongs to a different time as it were. Yet by consciously seeking to embrace the spirit of the age epochalism can deny the cultural continuities that persist through time. As a modern intellectual who helped to pen the creation of the country and who insisted that Papua New Guinea should retain its traditional heritage as it evolves into independent nationhood, Bernard Narokobi, had more than a reason for his style of introspective reflection. 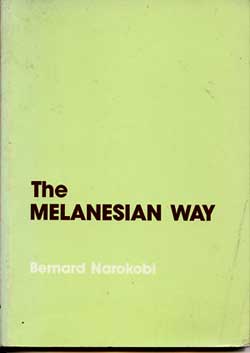 His reflections were captured in a series of a regular newspaper column ‘The Melanesian Voice’ which were published by the Post Courier in the late 1970s and early 1980s. His reflections were provocative and sparked a vituperative debate which was both sympathetic and cynically dismissive. The Melanesian Voice urged Papua New Guineans to make wise and selective choices about Western and Melanesian lifestyles and forms of creativity which can be assimilated into a new Melanesian Way. With the persistent encouragement of the philosophers, Henry Olela and Kaleb Kolowan, at the University of Papua New Guinea, Narokobi’s reflections in the newspaper column were published in his widely cited book The Melanesian Way. This book contains not only his reflections but also the responses of his readers. The general philosophical thrust of the book centers around a holistic notion of the total cosmic vision of life which is based on the recognition of an interdependent relation between humans (including cosmological and ancestral presence) and our natural environment.

This view of interdependence bypasses the simple-minded Western metaphysics of nature-culture so that our exploitation of natural resources is not based on man’s apparent dominion over nature but one that is sanctioned and governed by a relation of reciprocal interdependence. With reciprocal interdependence in mind, Narokobi was propagating an authentic view of development as a process of slow but deliberate change and his attendant views of land and property ownership made his reflections became easily categorized as socialist in its economic orientation. Narokobi didn’t just defended traditional Melanesian values but actually claimed modernity not as a cultural predicament but as a Melanesian project. If the encounter between ‘tradition’ and ‘modernity’ should appear as a dialectical tension, The Melanesian Way was a synthesis of sorts. Part of its jurisprudential origins came from the work and concerns of the Constitutional Planning Committee (CPC) of which Narokobi served as its permanent legal consultant. CPC was grappling with a problem of managing social and economic change. The CPC held that if Papua New Guinea is a country underwritten by traditional egalitarian ethos, development in particular and modernity in general might bring us widespread inequality. How can we convert the platitudes of Melanesian egalitarian values into a policy framework? Narokobi’s response has already been formulated and expressed in the preamble of the Constitution by way of the National Goals and the directive Eight Point Plan so that development should be guided by a general notion of Papua New Guinean Ways with a deliberate commitment towards fostering equality. When the national economy moved away from small holder productions to capital intensive projects such as in the mining industry, the Melanesian Way appeared prominently in the conceptual form of the ‘development forum’ which has now become an integral part of the mining, oil and petroleum industries shared agreements between the state, developers, landowners and provincial governments.

These are but few examples of policy developments that have emanated from the ideas presented in the Melanesian Way. I have chosen the tension between ‘tradition’ and ‘modernity’ to historicise Narokobi’s philosophical response via the notion of Melanesian Way which is only one of his many and diverse contributions. Narokobi’s industriousness and influence is not limited to law, policy or politics for which his contributions have been remarkable and formidable. Indeed he has touched and affected various sectors of contemporary Papua New Guinean and Melanesian life. If anthropologists have understood Melanesian persons to be distributed through the relations that compose them, Narokobi is a defining Melanesian icon of that personage. He has in retrospect distributed himself widely through his writings in fields as diverse as law, human rights, politics and leadership, fiction, poetry and playwriting, social history, theology and philosophy. His books and articles reveal him to be not only a moralist who advocated the virtues of Melanesian cultural life-world but also as one of its penchant critic who challenges all of us to be at once purposive, laborious and prosperous in all of our undertakings. Scholars such as anthropologists have undertaken studies based on some of his works and others have written either as a direct response to or as an extension of his provocations.

Because his works are scattered in various literary sources, there has been an expressed desire to research and establish a full bibliography and commentary on all of his works when he was still alive but now his death has given us renewed inspiration to not only celebrate his moral and intellectual leadership but also to recover and extend his life and legacy posthumously. In this vein the family and friends of Bernard Narokobi would want to raise funds and generate a forum through conferences, lectures and publications that both build on his work and depart from it. After The Melanesian Way is a tentative title which can be changed once our focus gets clearer but it is intended to implicate a posthumous interest as much as an expected analytical engagement with the works of one of the foremost of Melanesian public intellectuals.

5 thoughts on “After the Melanesian Way – initial thoughts for discussion”