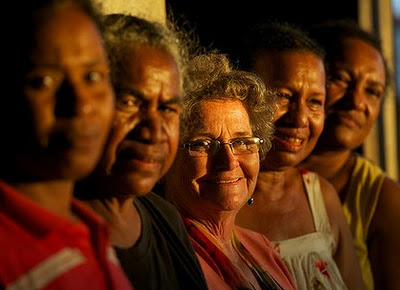 I admire Dame Carol Kidu and was very impressed with her when she just disassociated herself from the MTS [Michael T Somare] mob. As technically we do not have a parliamentary opposition, it would be real good if the Dame took up the challenge of sitting there and taking the men to task on the ‘hard questions’. So I just requested her on what her future intentions may be and this is the Dame’s candid response:

.
“I am amazed how people are so interested in analysing my recent actions. Thanks to those who offer words of support – being a politician is not easy. Some posts are assuming that there must be some devious plot and or tactical movement involved.

Sorry to disappoint them, but as the only woman I’ve tended to be a ‘lone ranger’ in my political strategies. I had no alternative than this strategic move.

After 14 and a half years in politics I have no desire to be tainted by the Military Interventions that occurred. Where else could I go other than the opposition and as it is empty logically I must be the leader unless others decide to do the same. I believe that at least one other “dis-enchanted person” wishes to join me but not with the intention for a vote of no confidence as you would all know under existing law it would be illegal this close to an election.

I am still a Parliamentarian and I have a duty to fulfill my roles as such until the return of writs after the elections. I was very frustrated sitting in the middle benches.
At least in the opposition I have a recognised voice in our Parliamentary Democracy. There is a real need for bi-partisan, constructive debate on some of the populist policies that are being announced.

In addition I sincerely hope that I can retain the position as leader of the opposition, because while other MPs are campaigning, I can spend 5 months working on building the institutional capacity of the Office of the Opposition.

Our Parliamentary democracy has been seriously weakened and a strong, vibrant, independent Office of the opposition is basic to good governance.

In anticipation of the acknowledgement of my letter to the speaker stating my intentions to occupy the opposition bench, I have already started to research capacity building possibilities and seek possible avenues for assistance in this exciting challenge.

Hope this clarifies that there are no sinister intentions, nor ridiculous ambitions for power near the end of my 15 year Political career.

Some of you may be intending to stand and you will soon find, like I did, that politics is not an easy ‘game’.”

Well said, and thank you for your candid comments, Dame Carol Kidu.

10 thoughts on “THE DAME RESPONDS”