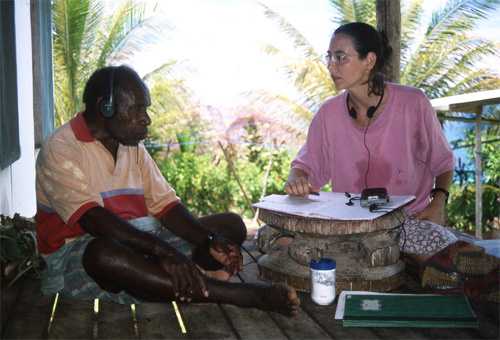 April 4, 2012 — Most of the people who spoke Arapesh when University of Virginia linguist Lise Dobrin conducted field work in Papua New Guinea about 15 years ago have died of old age. Their children no longer speak the language, and their grandchildren have almost no knowledge of their ancestral tongue, she said.

But Arapesh has a chance to live on through a digital archive Dobrin has created with the help of U.Va.’s Institute for Advanced Technology in the Humanitiesand an emerging collaboration with some middle-aged and younger Arapesh.

Dobrin, an assistant professor of linguistics in the College of Arts & Sciences’anthropology department, began the archive in 2005 and is focusing on it this year with support from the institute’s residential fellowship. The “Arapesh Grammar and Digital Language Archive” also has support from the Documenting Endangered Languages program, a partnership between the National Endowment for the Humanities and the National Science Foundation.

Papua New Guinea, half of a Pacific island and slightly larger than California, lies north of Australia. One of the most culturally diverse countries on Earth, it is home to more than 800 languages, none of which traditionally was written down.

What is lost when a language falls into silence? A treasure trove of cultural information that has been passed down from generation to generation, Dobrin said. Endangered languages have properties only the speakers know, such as classifications of the natural world, for example.

In addition, there is a lot to learn from diverse systems of oral expression. Dobrin first went to Papua New Guinea in 1997 to study the system of noun categorization of Arapesh for her University of Chicago dissertation. Despite all of the strides in research, scientists and scholars still only partly understand language, she said.

From 1998 to ’99 in the village of Wautogik on the northern coast, she recorded Arapesh conversations to document speech patterns. She used a portable analog stereo cassette recorder and lavalier microphones to record villagers telling stories, talking about how they did things in everyday life, such as gardening, and describing events like First Communion. The fledgling Internet was of no use to her then.

Many Arapesh villagers today use Papua New Guinea’s lingua franca, Tok Pisin, as their medium of communication in daily life. Tok Pisin comes from the English “talk pidgin,” pidgin being the term for communication developed between people with different languages. English is taught in schools.

Since the 16th century, several European nations have occupied parts of New Guinea; the eastern half gained independence from Australia in 1975. As in other developing countries, younger Arapesh have moved to cities, become educated and stayed to work, sending money home to the rest of the family. And thus, Arapesh has become endangered in four generations.

Dobrin’s work is also getting the people themselves involved. “Many Papua New Guineans are now global citizens, but they want to learn their ethnicity,” she said. When a group of urban Arapesh who use Facebook stumbled upon the Arapesh archive, they reached out to Dobrin, saying, in effect, “Can you help us learn our language?”

Last month, Dobrin brought together a dozen people to discuss the best ways to make Arapesh, and possibly other endangered languages, available online to the tech-savvy generation and to connect far-flung villagers to one another. Worthy Martin and Daniel Pitti, co-directors of the Institute for Advanced Technology in the Humanities, and a few other professors and graduate students working on other language projects, met here. Emmanuel Narokobi, an Arapesh man, participated from Papua New Guinea via Skype.

Narokobi, who has an information technology business, said he is eager to relearn his Arapesh language.

“Being Arapesh is there, but hidden or in the background. I would like to be able to take off this modern mask,” he said. “It would be a big deal to me to connect these different worlds.”

In a country of 6 million, the technological device spreading most quickly seems to be the mobile phone, Narokobi said. The number of cell-phone users has surpassed 2 million, but that still leaves twice as many people without them. Even fewer have access to the Internet on a computer.

Dobrin is working with Narokobi and other urban Arapesh to determine what information would be most useful to them. The community-based addition to this research and the effort to “mobilize the materials” is part of a trend in linguistics, she said, to expand the preservation of endangered languages with information and materials that communities want.

“I feel like I’m holding this treasure – their culture – in a safe for them,” Dobrin said. Although the challenges are steep, she has begun a long-term reciprocity with the Arapesh to help preserve their way of life, enabling them to re-draw a sense of identity without limiting their ability to live in the modern world.