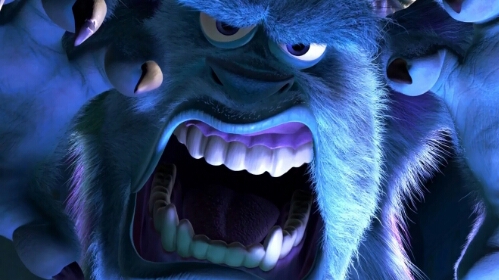 Have you ever watched the movie ‘Monsters Inc.’, you know the Disney animated film where Monsters are teleported through doors into children’s bedrooms to frighten them enough to capture their screams? Apparently the screams were powerful enough to power their electrification systems.

But our Hero’s in the film soon discover the truth that actually laughter has a higher energy rating and that it was able to be extracted with drastically less trauma and energy.

This pretty much sums up how I’m feeling right now from reading on PNG Loop that K4.5 million is being spent on producing a book and film on Gender Violence. As someone that receives donar money for film projects and knowing also that the local TV series Grace was produced with far far less funding, I’m wondering whether K4.5 million to keep drumming into PNG women’s heads that they are suffering from something, is an unsustainable media strategy that depends more on shock value and less on building confidence, hope and pride in PNG.

Perhaps I’m being unfair in that I haven’t seen the productions yet to fairly judge, but with a film title like ‘Harim Mi’ or in English, ‘Hear Me’, I’m not convinced that it’s going to be a film that’s asking us to dream and hope.

But the biggest indicator that tells me this is a waste of resources is the price tag, I remain to be proven wrong but my guess is that the K4.5 million is being poured into a foreign film production company who besides not assisting with local industry development, will most likely not be able to understand the complexities of the subjects and will perpetuate the image that all women in PNG are suffering from Gender Violence without addressing the wider issue of healthy relationships that can help produce successful women within a supportive environment.

We have enough issues in PNG without being prodded for more shock value and if this K4.5 million production turns out to be more about our screams rather than our laughter, I may have to bring some other emotions to the conversation.

8 thoughts on “Are We Over Glorifying Female Abuse?”