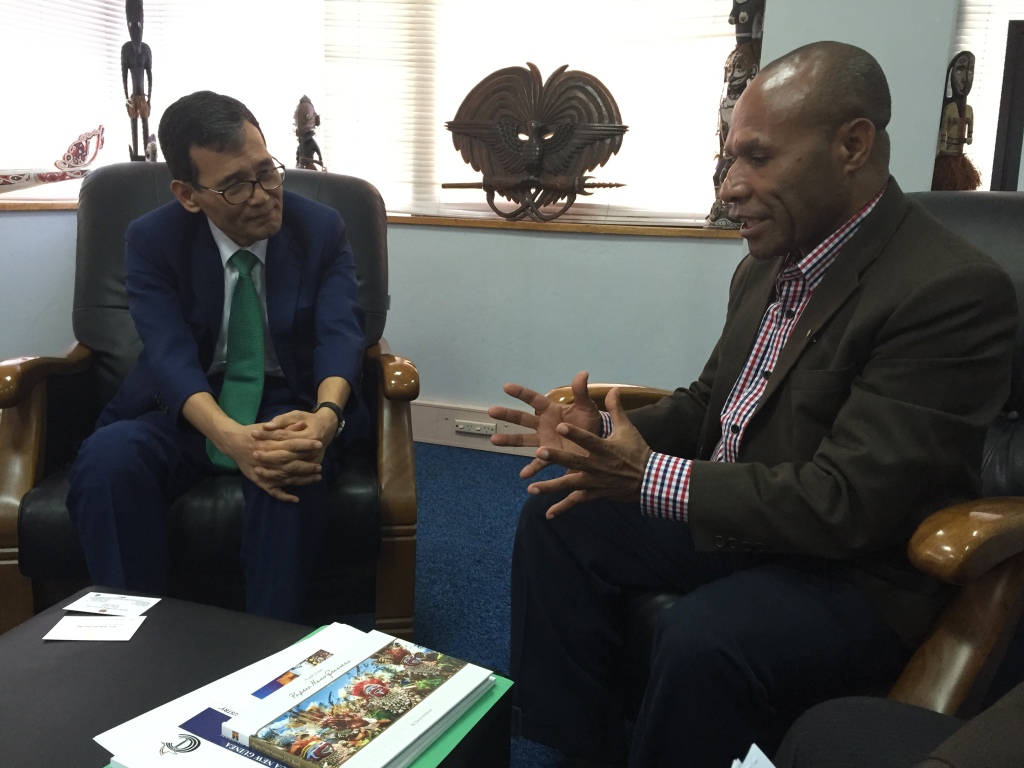 The Minister for Tourism Arts & Culture Boka Kondra this morning (Wednesday 21 January 2015) welcomed South Korean Ambassador to PNG His Excellency Kim Seong-choon to his Ministry office for a courtesy call.

“PNG and Republic of Korea have enjoyed friendly, co-operative, constructive and expanding relations for the past 38 years”, Minister Kondra said.

“High-level visits at political and senior officials’ level should be encouraged to foster common understanding and appreciation of issues of mutual concern and interest to both countries and to further develop bilateral ties.”

“This has now paved the way for both countries to consolidate the already expanding and mutually beneficial bilateral cooperation between the two countries.”

Minister Kondra told Ambassador Kim that both PNG and Republic of Korea were represented at the 8th APEC Tourism Ministerial Meeting in Macao, China, on 13 September 2014.

Minister Kondra represented PNG in Macao where 16 resolutions were adopted as what is now known as the ‘Macao Declaration’.

“Part of Resolution 5 of the Macao Declaration encourages member economies to increase cultural exchange and integration to create a better enabling environment for the integration of the Asia-Pacific tourism market.”

Minister Kondra told Ambassador Kim that he wishes to build on the efforts of Prime Minister O’Neill and include tourism arts and culture as another area of bilateral cooperation between our two countries.

In considering tourism arts and culture as another area of bilateral cooperation, Minister Kondra proposed a strategic approach starting with an invitation for Ambassador Kim to an awareness workshop for the Tourism Arts and Culture Sector Plan Framework 2015-2018.

Minister Kondra said that after the workshop, the framework would be proposed to the government for official endorsement and he expects it to be used by sector agencies under his Ministry to guide planning and budgeting including guiding interactions with bilateral partners.

Minister Kondra also raised the increasing level of bilateral cooperation between PNG and Republic of Korea saying that this makes it essential for an Air Services Agreement between PNG and South Korea.

The agreement is essential as it will facilitate tourism, trade, and investment between the two countries.

Minister Kondra reiterated that with the increasing level of bilateral co-operation between PNG and Republic of Korea, it is imperative that this issue be prioritized to facilitate tourism, trade, and investment between the two countries.

Minister Kondra said that with the air services agreement in place, reciprocal visa arrangements, appropriate facilities, and promotion, he would like more South Koreans to visit PNG every year.

Meanwhile, Ambassador Kim has agreed-in-principle to two proposals although these need to be sanctioned by the South Korean Government.