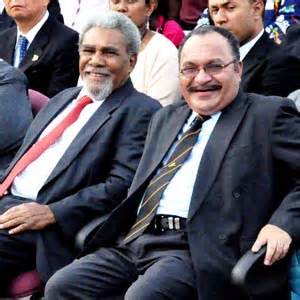 No one feels free.

We live in fear, with our mouths shut. We see, but we don’t talk.

Ministers are afraid to speak their minds, fearing they will lose their job.

Provincial Governors are afraid to speak their minds, fearing their province will be starved of  funds.

Backbenchers are afraid to speak their minds, fearing they will never become ministers, that their District funds will not be paid, and promise of funding for other projects will not materialise.

The private sector is afraid to speak at all, fearing threats to business, loss of contracts, and now even forced takeover.

Papua New Guineans are afraid to speak their minds, fearing harm to themselves, their family members, their business interests.

No one is safe.

In Brisbane recently the Prime Minister joked when asked by a journalist whether there was an order for my arrest, saying: “Absolute nonsense, absolute nonsense. We (PNG) are not in Zimbabwe or somewhere you behave in that manner.”

Oh no? Look at the deportation of Mark Davis.

Mark Davis has a close association with Papua New Guinea for 40 years: married locally, children, bubus, extended family; a law-abiding professional journalist with a love and passion for our country.

Yet he was effectively kidnapped by the Police.

He was tricked into going to a meeting at the Department of Commerce and Industry, where waiting Police bundled him into the back seat of a vehicle. Either side of him were uniformed policemen, one with a pump-action shotgun, and the other with an M16.

He was taken to his apartment to get his passport, and was told he could take a bag. Tricked again, he was not allowed to take the backpack he packed with his personal belongings on to the plane – it has not been seen since.

Mark Davis was effectively smuggled out of the country by Migration and Police officers, with the assistance of Air Niugini.

Mark was driven straight onto the tarmac and to the plane. He did not check in. He did not appear before Customs officers to present his passport. He did not go through airport security.
All breaches of law and border protection by Migration, Police and Air Niugini.

He was put on a plane to Brisbane, when his point of repatriation is Cairns. His wallet was taken from him, so he arrived in Brisbane at night without his Australian phone, without one toea or cent, without any of his Australian bank or credit cards.

This is Mugabe in the making.

And what was Mark’s crime? His crime was to work for me. Foreign Minister Rimbink Pato told the ABC that Mark was “issuing statements on behalf of the PNG Sustainable Development which we considered that he was not acting in the best interests of our country”.

So it is now a crime for a law-abiding foreigner with a valid work permit and visa to work for PNGSDP.

When reminded by the ABC journalist that Mark “wasn’t making the statements, he was simply issuing them on behalf of PNGSDP, which is his job to do”, Mr Pato’s lame reply was “he was issuing them directly from his office”.

Mark’s crime was that he was working for Mekere Morauta and PNGSDP.

No one is safe.

Everyone is silent, apart from the bloggers. Papua New Guineans have resorted to social media like wildfire, not just because it is the thing to do these days, but because they have no other avenue to speak their minds. Of course there is the odd O’Neill & Co troll and stooge on there too, but the overwhelming majority of comments on PNG social media are critical of the Government, of corruption, of the flagrant breaches of the law and of due process that are occurring every day.

How, Papua New Guinea, can we lift the cloud of fear that has descended on us, and break the wall of silence?