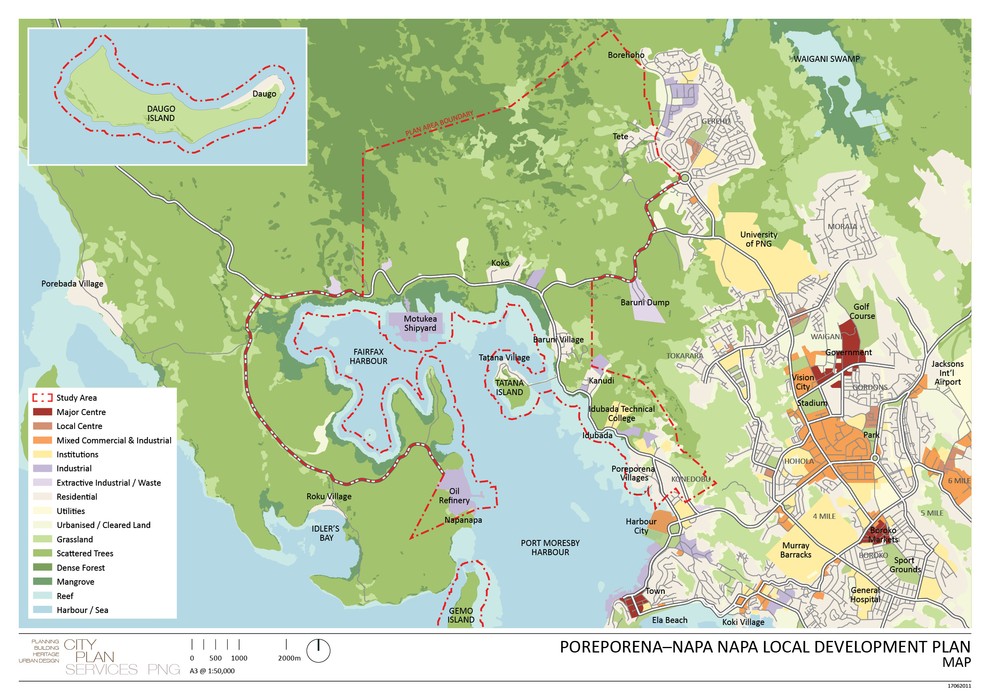 As is expected, the landowners of the National Capital District will be the first to bear the brunt of rapid development in PNG. Unlike all our other sleepy Provinces, Port Moresby has seen a rapid expansion and growth as a side effect of the new resources boom. Development comes at a cost and good or bad it has to be faced. As stated on Port Moresby Chamber of Commerce website “On current projections the city will grow from around half a million to over two million by mid-century.”

It’s therefore pleasing to note that planning has been conducted for the expansion of the city for the new Poreporena-Napa Napa Local Development Plan. You can see full details of this on the Port Moresby Chamber of Commerce website and you can download PDF’s of the plan here, here and here.

However communication and working with the landowners will always be an issue with all major projects and developments in PNG. So last week the National Capital District Physical Planning Board received a petition from Motuan landowners from the nation’s capital demanding extension of the comments and objections period for the Poreporena-Napanapa Local Development Plan by 12 months.

The Board was advised that it had until today, Monday (February 18) close of business to respond to their petition.

In the petition, the petitioners said that the 28-day minimum period for comments and objections, which ran from December 2012 to 15 February 2013 pursuant to Section 59 of the Physical Planning Act, was harsh and oppressive. The petitioners continued:
“We are unsophisticated persons with untrained eyes and minds that have yet to read the Poreporena-Napanapa Local Development Plan.”

The petitioners demand a 12-month extension to the legal period for comments/objections, commencing 15 February 2013 close of business, to enable affected villagers to put together a technical team and a program to prepare an alternative to the Plan.

The MKTWFA Inc is prepared to work in partnership with NCDC, MKA, and the petitioners if all three parties agree to a win-win-win outcome.
The Poreporena-Napanapa Local Development Plan is part of the National Capital District Urban Development Plan 2006-2015 and is promoted by the NCD Physical Planning Board.

The Motu Koitabu The Way Forward Association Inc. is registered in Papua New Guinea as Association No. 5-5262. It is an indigenous nongovernment organization that functions in a non profit, non-sectarian, and non-party-political way to promote, monitor, and secure the rights of the Motu and Koitabu people of Papua New Guinea in partnership with government and non government organizations.)