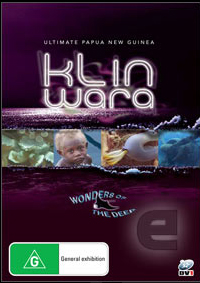 Join underwater adventurer John Boyle in Papua New Guinea as he visits an ocean where huge shoals of giant fish gather over remote sea mounts. An ocean of massive biodiversity, home to the most bizarre sea creatures on the planet and where the debris of WW2 is scattered throughout the jungle and across the sea floor.

New Guinea is a huge mysterious land of jungle cloaked mountains and pristine tropical islands with a society of isolated tribes where almost one third of the world’s languages are spoken, and where strange and gruesome traditions survive. It’s here that John Boyle has come in his quest for the ultimate undersea experience. Over 5 years John has explored the high mountains and great rivers of this last frontier, dived the remotest islands and even dived deep in the jungle, capturing images of underwater splendour and of creatures never filmed before.

This visually stunning film is the result of those explorations. In this strange and mysterious world John experiences undersea encounters of every kind – pristine reefs, unique and rarely seen macro creatures, a blue hole deep in the jungle, and even the planet’s longest creature – in the most awesome and magnificent experience of his 30 years diving.

*But the DVD from here