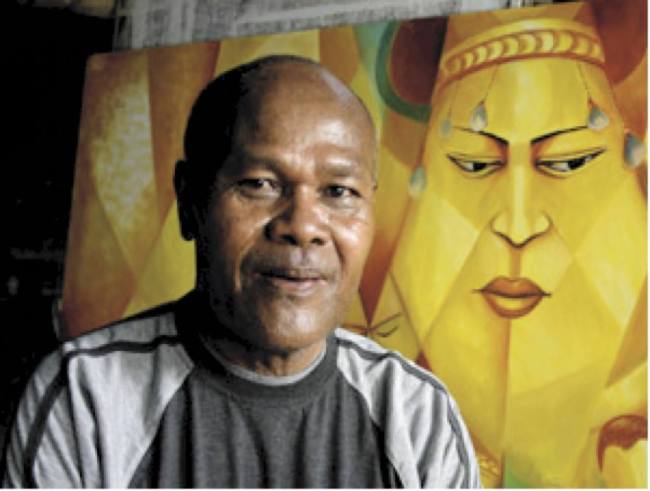 .
By Andrew Motou, Director National Museum & Art Gallery
.
Papua New Guinea has lost another one of its pioneer artist with the sudden passing of the late Martin Morububuna who succumbed to a fatal cardiac arrest on Saturday evening. Martin was doing what he does best, painting, at his humble home at the Maria Haus in Waigani when he received an intense heart attack. A rushed attempt to spare him was not successful and so Martin left us with some of his paintings incomplete much like he left behind his wife and children!Martin Morububuna hails from Kwebwaga Village in Kiriwina, the largest of Trobriand Islands. At an early age he underwent cultural training which allowed him to grasp the flow of ideas and interpretation as though they constitute a perpetual stream as if one was watching the flow of water in a river or a perpetual rain of ideas, Martin then came to study visual arts at the newly opened National Arts School in 1974.The Trobriand trope of perpetual flux, as articulated by their notional wisdom of sopi, was already in his conceptual repertoire when he arrived with bare feet in Moresby and equipped only by a set of crafty artistic fingers and a nascent visual imagination. On arriving at the National Arts School, he was preceded by other pioneering artists, who are as famous as Kawage, Akis and Jakupa while one of his original classmates was an equally famous artist and latter his teacher Joe Nalo. The other group of art students studied music who were his contemporaries latter made up the famous Sanguma Band.The mid 1970s was a remarkable period of heightened cultural creativity in PNG.

Martin Morubuna is like a Kula jewel whose name and fame has spread throughout the world yet he remains a simple and very humble man. In Massim culture it is clear that prestige is found in the circulation of names and in the paradox of keeping and giving at the same time. It now seem as though he kept the sopi and gave us his works and it was perhaps for reasons such as this that John Kasaipwalova sought to the start the Sopi school on Kiriwina. Martin was caught in a predicament of sorts: being traditional and modern at the same time and along with this came other sorts of apparent paradoxes that pervaded his life on a daily basis.

But looking into Martin’s life it seem as though this predicament gives him a persistent quest to resolve the paradox of being famous and being poor at the same time. He brought art to the streets and walls of Port Moresby as well as the honour of carving wooden panels that adorn the Speaker’s Chair in the National Parliament. He has spread his renown through the corpus of paintings which now appear in many museums, art galleries and private homes in many parts of the world in the Pacific, Australia, Europe and the USA.

His art draws upon an elegant combination of local Trobriand ideas and experiences and Western forms of artistic techniques that involve the use of perspectives, fragmented images and various colours. Martin is one artist of his generation whose work has brought into conversation a critical cultural dialogue between a Melanesian and a Western mode of the visual and the geometrical”.

We will miss his humility, philosophical charm and artistic wit from which he has guided us into an enlarged theater of vision and of perspective.