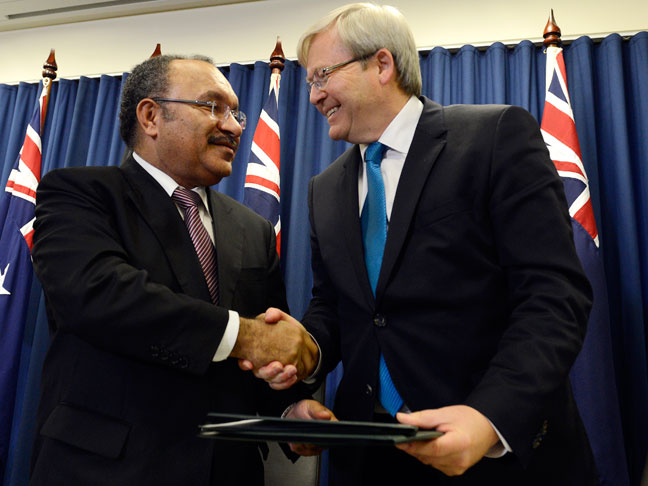 This Arrangement outlines further practical measures Australia and Papua New Guinea will pursue together to combat people smuggling. It builds on the mutually agreed principles governing cooperation set out in the Joint Partnership Declaration signed in Port Moresby in May 2013, notes that Australia and Papua New Guinea have a common interest in addressing regional and global challenges, in collaboration with the wider region, including other countries in the South Pacific. The cooperation outlined in this Arrangement underlines the strategic importance and enduring nature of the bilateral relationship, and the commitment of both governments to ensure that the relationship remains relevant to contemporary challenges.

1. Australia and Papua New Guinea recognize the serious and urgent humanitarian and border security challenge presented to regional countries by people smuggling. Both countries recall the key outcomes of the Fourth Ministerial Conference of the Bali Process on People Smuggling, Trafficking and Related Transnational Crime, held in Indonesia in March 2011. These include encouraging sub-regional and bilateral arrangements to create disincentives for irregular travel, including through possible transfer and readmission arrangements.

2. Existing cooperation between Australia and Papua New Guinea, in particular through the Manus Island Regional Processing Centre, represents a significant element of the regional response to people smuggling. Australia warmly welcomes Papua New Guinea’s offer to adopt additional measures which build on the Manus Island Regional Processing Centre. These measures will make a significant further contribution to encouraging potential unauthorized arrivals to avail themselves of lawful channels to seek asylum and to abandon the practice of perilous sea journeys which has led to the deaths of so many.

5. What is unique about this Arrangement is that persons found to be refugees will be resettled in Papua New Guinea and any other participating regional, including Pacific Island, state. Persons found not to be refugees may be held in detention or returned to their home country or a country where they had right of residence.

6. The Refugees Convention requires a commitment to non-refoulement. However the missing element in current regional processing arrangements involving Australia is the absence of a final destination for proven refugees for permanent resettlement.

9. Australia will bear the full cost of implementing the Arrangement in Papua New Guinea for the life of the Arrangement. If this requires additional development of infrastructure or services, it is envisaged that there will be a broader benefit for communities in which transferees are initially placed.